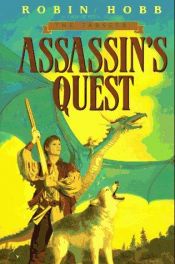 Assassin's Quest is a book by Robin Hobb, the third in her Farseer Trilogy. It was published in 1997.

The first book of this series was great, Magic, Propose, quest, love and logic. As the series continues It becomes a sh*t fest on to the main character. *Spoilers? i think no real detail just general opinion of whole thing.* the main character seems to simply be a condom for every character in this book to ejaculate in. He is used and used again, He loses so much for nothing he truly cares about and at the end of it all is simply thrown away as the used condom he is. The book tries to make mysteries and cliff hangers but it fails at this too.. I'm not sure if this book was made for a more daft audience but anyone with half a brain can see your big reveal 50 chapters before you reveal it! Mindless rants about random objects to explain the scene in between important parts of the book that just brings the mood down. The pacing is wrong and terrible! The main character is wrong and TERRIBLE! With the exception of the first book.. this series is lacking in both creativity and logic in its own world such a damn shame