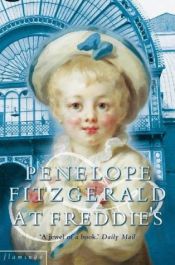 At Freddie's is a novel by British author Penelope Fitzgerald. It concerns the run-down, barely viable Temple Stage School, an acting school for children, known as "Freddie's", after its headmistress Frieda "Freddie" Wentworth.
The children regularly perform as fairies in A Midsummer Night's Dream, Arthur in King John, and the Lost Boys in Peter Pan.
Freddie is relentless in her commitment to traditional stage acting, and continually rejects training for film, television, and commercials.
At Freddie's was her second novel to be published in the US, although some sources describe at as her first such.