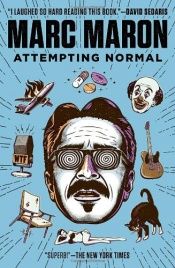 Marc Maron is “a master of spinning humor out of anguish” (Bookforum), even when that anguish is pretty clearly self-inflicted. In Attempting Normal, he threads together twenty-five stories from his life and near-death, from his first comedy road trips (with a fugitive junkie comic with a missing tooth) to his love affair with feral animals (his cat rescues are bloody epics) to his surprisingly moving tales of lust, heartbreak, and hope. The stories are united by Maron’s thrilling storytelling style—intensely smart, disarmingly honest, and explosively funny. Together, they add up to a hilarious and moving tale of failing, flailing, and finding a way.

“I laughed so hard reading this book.”—David Sedaris

“Superb . . . A reason that [it] is a superior example of an overcrowded genre—the comedian memoir—is Mr. Maron’s hardheaded approach to his history, the wisdom of experience.”—The New York Times

“Marc Maron is a legend because he is both a great comic and a brilliant mind. Attempting Normal is a deep, hilarious megashot of feeling and truth as only this man can administer.”—Sam Lipsyte

Praise for Marc Maron and WTF

“The stuff of comedy legend.”—Rolling Stone

“Marc Maron is a startlingly honest, compelling, and hilarious comedian-poet. Truly one of the greatest of all time.”—Louis C.K.

“I’ve known Marc for years and I can tell you first hand that he’s passionate, fearless, honest, self-absorbed, neurotic, and screamingly funny.”—David Cross

“Revered among his peers . . . raw and unflinchingly honest.”—Entertainment Weekly

“For a comedy nerd, this show is nirvana.”—Judd Apatow

Dont Stand Too Close To A Naked Man