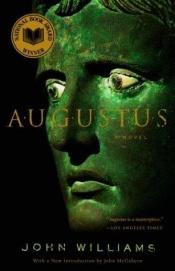 A brilliant and beautifully written novel in the tradition of Robert Gravesâ€™ I, Claudius, Augustus is a sweeping narrative that brings vividly to life a compelling cast of historical figures through their letters, dispatches, and memoirs.

A mere eighteen years of age when his uncle, Julius Caesar, is murdered, Octavius Caesar prematurely inherits rule of the Roman Republic. Surrounded by men who are jockeying for powerâ€“Cicero, Brutus, Cassius, and Mark Antonyâ€“young Octavius must work against the powerful Roman political machinations to claim his destiny as first Roman emperor. Sprung from meticulous research and the pen of a true poet, Augustus tells the story of one manâ€™s dream to liberate a corrupt Rome from the fancy of the capriciously crooked and the wildly wealthy.