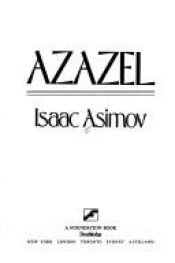 Azazel is a character created by Isaac Asimov and featured in a series of fantasy short stories. Azazel is a two-centimeter-tall demon, named after the Biblical demon.
Some of these stories were collected in Azazel, first published in 1988. The stories take the form of conversations between an unnamed writer and a shiftless friend named George. At these meetings George tells how he is able to conjure up Azazel and their adventures together. George's greatest goal in life is a free lunch, but Azazel is constrained so that he cannot directly benefit George. George can only call upon Azazel for favors to various friends, which invariably go awry. The stories' theme about a demon or alien that grants wishes echoes an earlier work by Lester del Rey, titled "No Strings Attached" from 1954.
"Getting Even" was the first story featuring Azazel, and was also the first "Union Club Mystery". Ironically, Asimov stated that this story was omitted from both The Union Club Mysteries and the Azazel collection because it did not match the later stories in either series. However, it does appear in another anthology, Tales From the Spaceport Bar.

Buy Jupiter and Other Stories