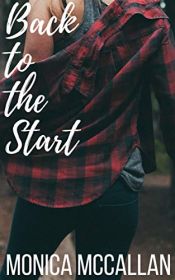 Back to the Start

When Remy’s grandmother dies, it means leaving her life in San Francisco and returning to a town she swore she'd never revisit, forced to confront a world she'd worked hard to put behind her over the last twelve years.

She's not expecting that the first girl to ever steal her heart, the pretty, popular Fallon Lewis is still around, and in a town this small, their paths continue to cross much to Remy’s dismay. It's hard enough seeing her first love, but it's exponentially more difficult when she can barely stand to look at the woman.

Remy's trip back has the possibility to open up doors she believed were shut long ago, but she's never planned on staying, and she definitely never planned on letting Fallon back into her life.

If she thought being a teenager in a small town was hard, she's about to find out how much harder life is when there's no one but herself to blame for her problems.

I'll Give You the Sun

Shadow of the Templar 1: The Morning Star