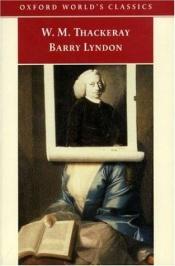 The Luck of Barry Lyndon is a picaresque novel by William Makepeace Thackeray, first published in serial form in 1844, about a member of the Irish gentry trying to become a member of the English aristocracy. Thackeray, who based the novel on the life and exploits of the Anglo-Irish rake and fortune-hunter Andrew Robinson Stoney, later reissued it under the title The Memoirs of Barry Lyndon, Esq..
Stanley Kubrick later adapted the novel into the movie Barry Lyndon. Unlike the film, the novel is narrated by Barry himself, who functions as a quintessentially unreliable narrator, perpetually boasting and not realising the bad light in which he casts himself.