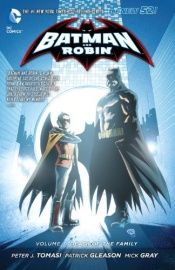 Bruce Wayne is Batman, Gotham City's dark protector. Damian Wayne is Robin, his partner in crimefighting-and his son. But something binds this Dynamic Duo together that runs deeper even than the blood in their veins: trust.

But what happens if that trust is broken?

After a year of silence, the mad laughter of the Joker can be heard echoing through Gotham's streets once again. Back with a vengeance, the Dark Knight's insane nemesis is out to destroy the Batman's connections to his closest friends and allies. And what better way to accomplish that than to pit father against son?

The relationship between Gotham's greatest heroes is put to the test like never before in BATMAN AND ROBIN: DEATH OF THE FAMILY (collects issues #15-17, BATMAN AND ROBIN ANNUAL #1 and BATMAN #17), from the bestselling creative team of Peter J. Tomasi (BRIGHTEST DAY), Patrick Gleason (GREEN LANTERN CORPS), and Mick Gray (BRIGHTEST DAY). It's the final word in whether this Robin is truly worthy of the mantle of the Bat!

Batman Vol. 3: Death of the Family