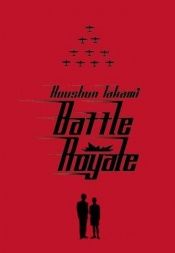 Battle Royale is a novel by Japanese writer Koushun Takami. Originally completed in 1996, it was not published until 1999. The story tells of junior high school students who are forced to fight each other to the death in a program run by the authoritarian Japanese government, now known as the Republic of Greater East Asia.
It was previously entered into the 1997 Japan Grand Prix Horror Novel competition but was eventually rejected in the final round due to its content. The novel became a surprise bestseller. It was ranked fourth by the 2000 Kono Mystery ga Sugoi!, an annual mystery and thriller guidebook, and sold over a million copies.
In 2000, one year after publication, Battle Royale was adapted into a manga series, written by Takami himself, and a feature film. The film was also controversial and successful, with it being condemned by Japan's National Diet, yet becoming one of the country's highest-grossing films. The film spawned a sequel, and two more brief manga adaptations were also created.