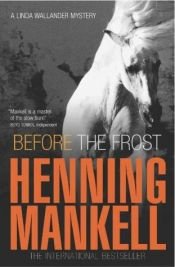 Before the Frost is a novel by Swedish crime-writer Henning Mankell.
The main protagonist is Linda Wallander, daughter of Inspector Wallander. The book was to be the first in a three-book series with Linda as the main character. However Mankell abandoned the series after just one novel when the actress playing Linda in the Swedish films, Johanna Sällström, committed suicide in 2007.
Kurt Wallander and Stefan Lindman also feature in the novel.