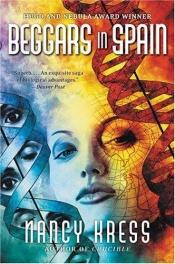 Beggars in Spain is a 1993 science fiction novel by Nancy Kress. It was originally published as a novella with the same title in Isaac Asimov's Science Fiction Magazine and as a limited edition paperback by Axolotl Press in 1991. Kress expanded it, adding three new volumes and eventually two sequels, Beggars and Choosers and Beggars Ride. It is held to be an important work, and is often hailed for its predictions of emerging technologies and society.
The original novella won the Hugo Award and Nebula Award. The novel was also nominated for both the Hugo Award and the Nebula Award, but did not win.

A Fire Upon the Deep