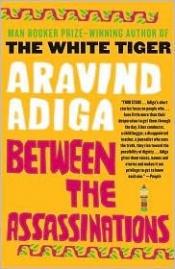 Between the Assassinations is the second book published by Aravind Adiga though it was written before his first book The White Tiger. The title refers to the period between the assassinations of Indira Gandhi in 1984 and her son, Rajiv Gandhi, in 1991. Indira Gandhi was the serving Prime Minister of India when she was assassinated; Rajiv Gandhi became Prime Minister in 1984, and left office following his party's defeat in the 1989 general election.
Between the Assassinations is a collection of short stories. It was published by Picador in India in 2008, and in Britain and the United States in 2009. While it reveals the beauty of the rural, coastal south where it is set, its subject is the pathos, injustices and ironies of Indian life.
The book had an initial print run of 16,000 copies, which is on the higher side for fiction in India.

What You Make It

The Virgin and the Gypsy

The Collected Stories of Amy Hempel

The Unpleasant Profession of Jonathan Hoag