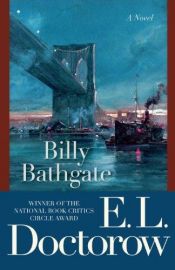 Billy Bathgate is a 1989 novel by author E. L. Doctorow that won the 1989 National Book Critics Circle award for fiction for 1990, the 1990 PEN/Faulkner Award for Fiction, the 1990 William Dean Howells Medal, and was the runner up for the 1990 Pulitzer Prize and the 1989 National Book Award. The story is told in the first person by Billy "Bathgate" Behan, a fifteen-year-old boy who first becomes the gofer and then surrogate son of mobster Dutch Schultz.
A 1991 film based on the novel starred Loren Dean as Billy, Dustin Hoffman as Schultz, Steven Hill as Otto Berman, Nicole Kidman as Drew, and Bruce Willis as Bo.