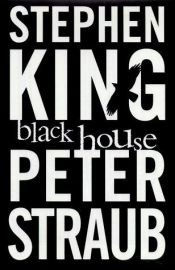 Black House is a Stoker Award nominated novel by horror writers Stephen King and Peter Straub. Published in 2001, this is the sequel to The Talisman. This is one of King's numerous novels, which also include Hearts in Atlantis and Insomnia, that tie in with the Dark Tower series.
Straub is from Wisconsin, which may be why the story is set there rather than King's frequently used backdrop of Maine. The town of "French Landing" is a fictionalized version of the town of Trempealeau, Wisconsin. There you will find "Chase Street", "Sumner Street", "Queen Street", and the famous "Sand Bar." Also, "Centralia" is named after the nearby small town of Centerville, Wisconsin, located at the intersection of Hwy 93 and Hwy 35.
A chapter of the book is written around Edgar Allan Poe's poem "The Raven."