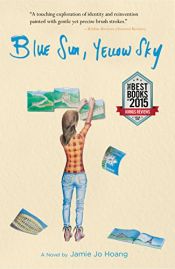 Hailed as “One of the best technical painters of our time” by an L.A. Times critic, 27-year-old Aubrey Johnson is finally gaining traction with her work. But as she weaves through what should be a celebration of her art, a single nagging echo of her doctor’s words refuses to stay silent—there is no cure. In less than eight weeks Aubrey is going blind.

Traveling on a one-way ticket around the world with childhood friend Jeff Anderson, Aubrey is in complete denial. But a blindfolded game of tasting foreign foods in China jolts her into confronting the reality of her situation. So begins her quest.

In this adult coming-of-age story, Aubrey struggles to make sense of her crippling diagnosis. But on her journey she finds a deeper understanding of herself and her life—sometimes fragmented and complex, but always with relentless truth.

"Blue Sun, Yellow Sky delivers a glimpse into the artistic process, a stunning globe-trotting journey, and the intimate portrait of mending a heart broken by life itself.” -- Indigo Wilmann, Visual Yarn

"The book is gripping for its thought-provoking power." -- Candi Sary, Underground Book Reviews.

"The characters here are fully realized, vivid and alive, and often do surprising things—or do/say things that are very human, which can be rare. I especially like Aubrey, who seems able to keep her head and her emotions in tact, all while dealing with a situation that might cripple other people. Instead, she reminds us of the lively nature of living a life well." - Judge, 23rd Annual Writer's Digest Self-Published Book Awards

From the Holy Mountain

Grounded: A Down to Earth Journey Around the World

Into Thick Air: Biking to the Bellybutton of Six Co …