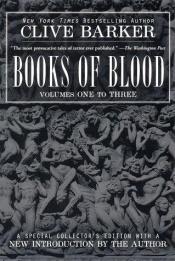 Rediscover the true meaning of fear in this collection of horror stories from New York Times bestselling author Clive Barker.

“The most provocative tales of terror ever published.”—The Washington Post

Everybody is a book of blood; wherever we're opened, we're red...

With the publication of Books of Blood, Clive Barker became an overnight literary sensation. His tour de force collection of brilliantly disturbing tales demonstrated a genius for dark invention that rivaled Poe and Sade. He was hailed by Stephen King as “the future of horror,” and won both the British and World Fantasy Awards.

Now, with his numerous bestsellers, graphic novels, and hit movies like the Hellraiser films, Clive Barker has become an industry unto himself. It is his powerful writing style and arresting imagery that have made Books of Blood a classic—and Clive Barker a cult phenomenon.