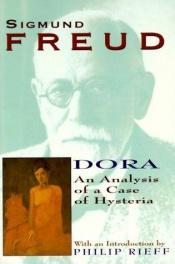 Bruchstück einer Hysterie-Analyse is a book written by Sigmund Freud.

Some good bits from the introduction: "Interpretation involves indoctrination... In this case, Dora refused to change her mind, and suddenly quit as a finla act of denial against the truth of Freud's insights. This is not to say that Dora's own insights were incorrect; they were at once correct and yet untherapeutic." "In this earnest debate, Frue'd tactic was not to dispute Dora's logic but to suspect her motives." Some good bits from the text: "1. The hysterical symptom is the memory-symbol of the operation of certain (traumatic) impressions and experiences. 2. The hysterical symptom is a substitute, produced by 'conversion,' for the reactivation of these traumatic experiences by association. 3. The hysterical symptom is, like other mental products, the expression of a wish fulfillment. 4. The hysterical symptom is a realization of an unconscious phantasy which serves as a wish fulfillment. 5. The hysterical symptom serves the purposes of sexual gratification and represents a part of the sexual life of the person (corresponding to one of the components of his sexual instinct). 6. The hysterical symptom corresponds to the recurrence of a form of sexual gratification which was real in infantile life and has since been repressed. 7. The hysterical symptom arises as a compromise between two opposing affects or instinctual trends, of which one is attempting to express a partial impulse or component of the sexual constitution, while the other tries to suppress it. 8. The hysterical symptom may represent various unconscious non-sexual impulses, but can never dispense with a sexual significance." [149-150] Some notes: If the hysterical symptom is "an expression of [the patient's]... repressed wishes," then how must those wishes be structured, if not as conscious wishes? Is what one wants apart from what one consciously wants like the conscious want as analogy or are they both types of want that can be categorized under some basic commonalities? [22] The conscious as a surface of the unconscious. [27] The untrue becomes intense or strained by virtue of its contact with the truth. [45] Since Freud is most recognizably a theorist of the division of desire in unity with itself, albeit in the form of the human person, his significance for political thought in the most abstract way is enormous.