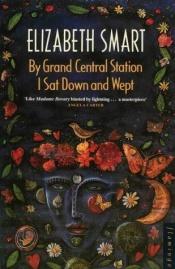 By Grand Central Station I Sat Down and Wept

By Grand Central Station I Sat Down and Wept is a novel of prose poetry written by the Canadian author Elizabeth Smart and published in 1945. It is widely considered to be a classic of the genre. In her preface to the 1966 reissue of the book, Brigid Brophy described it as one of the half-dozen masterpieces of poetic prose in the world.
It is commonly believed to be based on the author's passionate affair with the British poet George Barker, but she began writing the novel before she started seeing Barker, therefore it is only loosely based on this affair. The book might be characterized as a hymn to love and its supremacy above all other emotions and worldly practicalities. Smart discovered Barker's poetry in the late 1930s in a book store in London. She met several years later and conducted an affair with him for 18 years, which included bearing four of his 15 children. In the novel, the multiple pregnancies are reduced to one, and other details of the affair are omitted entirely. Indeed, the narrator's lover is barely described.
The title is a foretaste of Smart's poetic techniques.

Red-Dirt Marijuana and Other Tastes