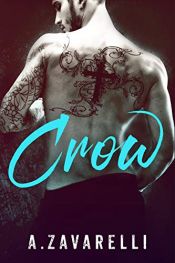 Novel by A. Zavarelli

He’s a killer. A mobster.

The last man on earth I’d ever want to be with. I won’t lose my head just because he’s hot, Irish, and has a wicked accent to boot.

He’s one of the only leads in my best friend’s disappearance, and I don’t trust him.

So I’ve got a few rules in mind when it comes to dealing with Lachlan Crow.

1.Keep a clear head and don’t get distracted.
2.Do what’s necessary and never forget why you’re there.
3.Never, and I mean never, fall for him.

Throw out the book altogether. Because the rules don’t apply when it comes to the Irish mafia.

It was only supposed to be temporary, but now Lachlan thinks he owns me. He says he’s not letting me go.

And I believe him.

But if it’s my attention she wants, she has it.

The Russians want her dead, and now it’s up to me to look out for her. This girl is trouble. A distraction I can’t afford.

So why have I already decided she’s mine?

I’ve claimed her and there’s no going back now.

This is a full-length standalone novel full of hot Irish mobsters and dark content. Please read at your own discretion.

The Boston Underworld Series consists of five full-length standalones that can be read in any order. There is character crossover, so if you prefer to read in order, the series order is as follows:

The Mountain Between Us

The Temple of Gold

The All-True Travels and Adventures of Lidie Newton

East of the Mountains

The Shelters of Stone