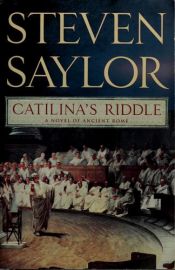 "A sweeping and marvelously evocative story . . ." Booklist.
A mystery of ancient Rome by the author of "Arms Of Nemesis."
When Gordianus the Finder deserts the fierce intrigues of Rome for domesticity on an Etruscan farm, his brilliant patron, the orator Cicero, draws him back with a curious proposal: keep Catilina, Cicero's radical rival, under a watchful eye.
Reluctantly, Gordianus complies -- and soon, despite himself, becomes intrigued by the notorious populist politician. Could Catilina really be conspiring against the Republic? Or are Cicero's accusation no more than vicious lies? Questioning his loyalty to his own patron, Gordianus comes to question even more when he discovers a headless corpse in his stables and is suddenly swept into a mystery more dangerous than any he has ever known.

The Venus Throw: A Novel of Ancient Rome

No Graves as Yet: A Novel of World War I