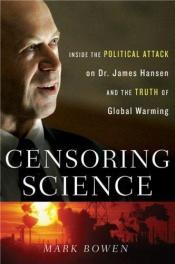 Censoring Science: Inside the Political Attack on Dr. James Hansen and the Truth ofGlobal Warming

The dramatic story of global warming, politics, and the scientist Al Gore calls “the most powerful and consistent voice calling for intelligent action to preserve our planet's environment.”

Censoring Science is the gripping story of the world's preeminent climatologist, Dr. James Hansen, the “pivotal character in the greatest and most politically charged science story of our time” (New Scientist). NASA's leading climate expert, Dr. Hansen first broke the international news on global warming at a Senate hearing in 1988. Little did he expect the rising storm of politically motivated resistance, denial, and obstruction.

Revealing the extent of the Bush administration's censorship of Dr. Hansen's findings, Censoring Science sets the record straight with solid scientific facts such as: the hottest years on record have occurred in the last two decades, and ice is melting at record rates all around the planet. Dr. Hansen shows how we can still prevent environmental disaster if the country and the government are willing to face the truth about global warming.

Off the Grid: Inside the Movement for More Space, L …

The Future of Life