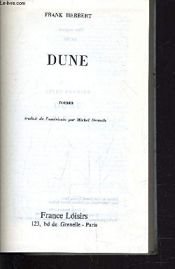 Chapterhouse: Dune is a 1985 science fiction novel by Frank Herbert, the last in his Dune series of six novels. It rose to #2 on The New York Times Best Seller list.
A direct followup to Heretics of Dune, the novel chronicles the continued struggles of the Bene Gesserit Sisterhood against the violent Honored Matres, who are succeeding in their bid to seize control of the universe and destroy the factions and planets that oppose them.
Chapterhouse: Dune ends with a cliffhanger, and Herbert's subsequent death in 1986 left some overarching plotlines of the series unresolved. Two decades later, Herbert's son Brian Herbert, along with Kevin J. Anderson, published two sequels – Hunters of Dune and Sandworms of Dune – based in part on notes left behind by Frank Herbert for what he referred to as Dune 7, his own planned seventh novel in the Dune series.