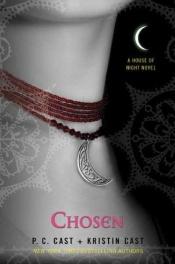 Chosen is the third novel of the House of Night fantasy series, written by American authors P.C. Cast and Kristin Cast. The book was released on March 2, 2008 by St. Martin's Press, an extension of Macmillan Publishers. The book has been since translated into more than 20 other languages including French, Spanish, German and Chinese.
Zoey is plagued by a terrible secret: Neferet, the High Priestess of the Tulsa House of Night, has been reviving the fledglings who had rejected the Change to add them to her personal army. Among them is her best friend, Stevie Rae, and every second she grows further away from her humanity, but Zoey will fight for her even if she doesn't want it.