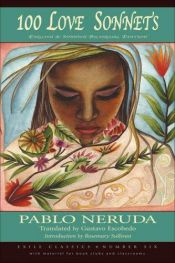 Cien sonetos de amor is a collection of sonnets written by the Chilean poet and Nobel Laureate Pablo Neruda originally published in Argentina in 1959. Dedicated to his beloved wife, Matilde Urrutia, it is divided into the four stages of the day: morning, afternoon, evening, and night.
The sonnets have been translated into English numerous times by various scholars. The most widely acclaimed English translation was made by Stephen Tapscott and published in 1986. In 2004, Gustavo Escobedo translated the 100 sonnets for the 100th anniversary of Neruda’s birth.

The Owl and the Pussy-Cat