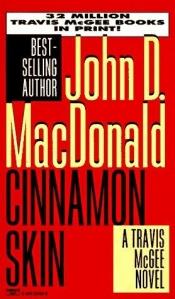 Cinnamon Skin is the twentieth novel in the Travis McGee series by John D. MacDonald. Like a few other books in the series, McGee ends up traveling to Mexico to solve a crime.
The title of the book comes from a passage in Chapter 26. The passage reads as follows:
"You smell like cinnamon and you have the right color. Cinnamon skin."
"My God, McGee, can't you come up with something more original."
"I thought it was."
She laughed. "It's a song, you idiot. Piel Canela: Cinnamon Skin. They sing it all over Mexico. ..."

The Cat Who Came to Breakfast

Murder between the covers

A Duty to the Dead