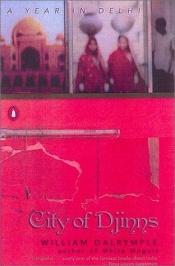 City of Djinns is a travelogue by William Dalrymple about the historical capital of India, Delhi. It is his second book, and culminated as a result of his six-year stay in New Delhi.
City of Djinns was the first product of Dalrymple’s love affair with India, centring on Delhi, a city with ‘a bottomless seam of stories’. Shaped more like a novel than a travel book, he and his wife encounter a teeming cast of characters: his Sikh landlady, taxi drivers, customs officials, and British survivors of the Raj, as well as whirling dervishes and eunuch dancers. Dalrymple describes ancient ruins and the experience of living in the modern city: he goes in search of the history behind the epic stories of the Mahabharata. Still more seriously, he finds evidence of the city’s violent past and present day - the 1857 mutiny against British rule; the Partition massacres in 1947; and the riots after the assassination of Indira Gandhi in 1984.
The book followed his established style of historical digressions, tied in with contemporary events and a multitude of anecdotes.

The Age of Kali