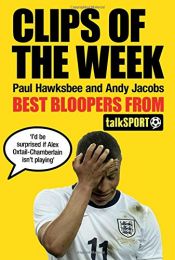 Clips of the Week: Best Bloopers from TalkSport

Every Friday afternoon at 3.30, the whole office at talkSPORT Towers stops to listen to the station's most popular feature, Clips of the Week, presented by Paul Hawksbee and Andy Jacobs. For all the professionalism of the presenters, there are always those moments when things don't quite go right, and words get jumbled up, or a guest on a phone-in says something so extraordinary you have to stop and think: did he really just say that?

For 13 years now, the hosts of the afternoon show have been running this feature, in the process collecting almost 4000 hilarious clips. In this book we get to read the very best of the best; they include Alan Brazil's occasional on-air lapses, as when he introduced racing reporter Rupert Bell: 'Here's talkSPORT's Rupert Bear...'. There's also the unbeatable moment when a Scottish caller was campaigning for Hearts' goalkeeper Antti Niemi to play for Scotland. The presenter replied that he was ineligible as he was Finnish, only to be told: 'He's no' finish, he only 28!'

The age of the warrior : selected essays

Will Write for Food : the complete guide to writing …

The Cat's Pyjamas: The Penguin Book of Clichés: The …