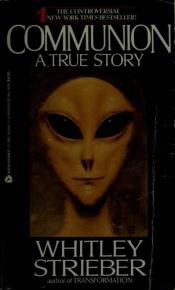 Communion: A True Story is a book by American ufologist and horror author Whitley Strieber that was first published in February 1987. The book is based on the claims of Whitley Strieber, who experiences "lost time" and terrifying flashbacks, which hypnosis undertaken by Budd Hopkins later links to an alleged encounter with aliens.
The book was later made into a film directed by Philippe Mora and starring Christopher Walken as Strieber and Lindsay Crouse as his wife, Anne. A 2008 trade paperback edition presents a new preface by the author.
Strieber compares the "familiar" being he sees, whom he describes as female, to the Sumerian goddess Ishtar.

There Is a River

Chariots of the Gods?