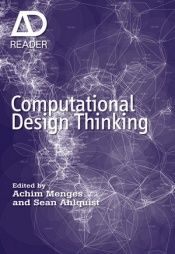 The current transition from Computer Aided Design (CAD) to Computational Design in architecture represents a profound shift in design thinking and methods. Representation is being replaced by simulation, and the crafting of objects is moving towards the generation of integrated systems through designer-authored computational processes. While there is a particular history of such an approach in architecture, its relative newness requires the continued progression of novel modes of design thinking for the architect of the 21st century. This AD Reader establishes a foundation for such thinking. It includes multifaceted reflections and speculations on the profound influence of computational paradigms on architecture. It presents relevant principles from the domains of mathematics and computer science, developmental and evolutionary biology, system science and philosophy, establishing a discourse for computational design thinking in architecture. Rather than a merely technical approach, the book will discuss essential intellectual concepts that are fundamental not only for a discourse on computational design but also for its practice.

This anthology provides a unique collection of seminal texts by authors, who have either provided a significant starting point through which a computational approach to design has been pursued or have played a considerable role in shaping the field. An important aspect of this book is the manner in which adjacent fields and historical texts are connected. Both the source of original inspiration and scientific thought are presented alongside contemporary writings on the continually evolving computational design discourse. Emerging from the field of science, principally the subjects of morphogenesis, evolution and mathematics, selected texts provide a historical basis for a reconfigured mindset of processes that generate, arrange and describe form. Juxtaposed against more contemporary statements regarding the influence of computation on design thinking, the book offers advancements of fundamental texts to the particular purpose of establishing novel thought processes for architecture, theoretically and practically.