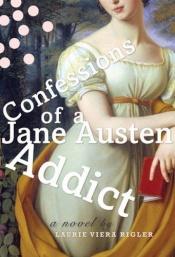 After nursing a broken engagement with Jane Austen novels and Absolut, Courtney Stone wakes up and finds herself not in her Los Angeles bedroom or even in her own body, but inside the bedchamber of a woman in Regency England. Who but an Austen addict like herself could concoct such a fantasy? Not only is Courtney stuck in another woman’s life, she is forced to pretend she actually is that woman; and despite knowing nothing about her, she manages to fool even the most astute observer. But not even her level of Austen mania has prepared Courtney for the chamber pots and filthy coaching inns of nineteenth-century England, let alone the realities of being a single woman who must fend off suffocating chaperones, condom-less seducers, and marriages of convenience. This looking-glass Austen world is not without its charms, however. There are journeys to Bath and London, balls in the Assembly Rooms, and the enigmatic Mr. Edgeworth, who may not be a familiar species of philanderer after all. But when Courtney’s borrowed brain serves up memories that are not her own, the ultimate identity crisis ensues. Will she ever get her real life back, and does she even want to?

Lost in Austen: Create Your Own Jane Austen Adventu …

The Boy Next Door