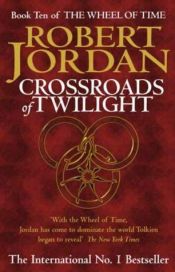 Crossroads of Twilight is the tenth book of The Wheel of Time fantasy series written by American author Robert Jordan. It was published by Tor Books and released on January 7, 2003. Upon its release, it immediately rose to the #1 position on the New York Times hardcover fiction bestseller list, making it the third Wheel of Time book to reach the #1 position on that list. It remained on the list for the next three months.
Crossroads of Twilight consists of a prologue, 30 chapters, and an epilogue. Lord of Chaos, Knife of Dreams, New Spring and The Gathering Storm are the only other Wheel of Time books to have an epilogue. Many of the events of Crossroads of Twilight take place simultaneously with the events of the previous book, Winter's Heart.

Prince of the Blood