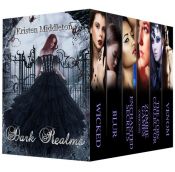 Vampires, witches, and zombies - all under one cover! If you enjoy action, adventure, romance, and humor then check out this boxed set. It features the first books in most of Kristen's horror and fantasy series, plus a couple of short bonus stories.

Warning - Adult language and situations - recommended for ages sixteen and above

Some stories do end with cliff-hangers.

When eighteen-year-old Emily wakes up to find herself being held captive in a barn with four other women and tries to escape, she finds herself being hunted by a dark presence through the deep woods of Montana.

Blur (Book One of Night Roamers)

Danger lurks in the dead of night...
Seventeen year old Nikki and her twin brother, Nathan, move to the small town of Shore Lake to start over after their mother is brutally attacked. When a missing teenager washes up on shore during their first night at the cabin and there are whispers of vampires in Shore Lake, Nikki begins to realize that there are things roaming in the darkness that are far more sinister than what they left behind in the city


Enchanted Secrets (Book One of Witches Of Bayport)

Magic, murder, and mayhem...
Eighteen-year-old Kendra learns that her mother has been keeping secrets, the biggest being that she and her twin sister, Kala, are descendants of a long line of witches. Unfortunately, where magic reigns, so does danger and she is forced into an adventure that leaves her racing against the clock to stop an evil curse.

In their small Iowa town, children start to go missing on their tenth birthday. The hot Irish girl across the street claims her creepy father, Mr. O'Darby, is a leprechaun who collects more than just gold coins, and 17-year-old Trent begins to fear for the safety of his brother, Ben, whose tenth birthday grows near.

Seventeen-year-old Cassandra Wild thought that living in the chaos of her mother's home daycare and dealing with new feelings for Bryce, her martial arts instructor, was a struggle until her world turned upside down. When an untested vaccine kills more than just a rampant flu virus, Cassie learns how to survive in a world where the dead walk and the living... run!

When Melody Williams goes missing at a concert, at Club Nightshade, her eighteen-year-old cousin, Chelsey Fairfax, sneaks into the club to find answers. Little does she know that some mysteries are better left hidden.

Meanwhile, Venom is in town, a hot new band from Europe, and the owner of Club Nightshade wants them there permanently...

A Girl's Guide to Vampires