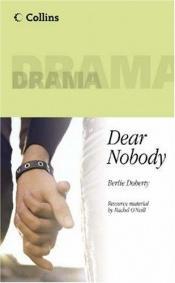 Dear Nobody is a realistic young-adult novel by Berlie Doherty, published by Hamilton in 1991. Set in the northern England city of Sheffield, it features an unplanned teenage pregnancy and tells the story of its effect on the teenagers and their families.
Doherty won the annual Carnegie Medal from the Library Association, recognising the year's best children's book by a British subject. Through 2012 she is one of seven writers with two such honors, having won the 1986 Medal for Granny Was a Buffer Girl. Also set in Sheffield, the earlier novel is a family saga whose point of entry is the Sheffield cutlery industry.
Orchard Books published the first U.S. edition in 1992.
Dear Nobody has been translated into many languages, and the stage version is often performed.

After the First Death