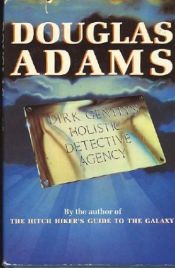 Dirk Gently's Holistic Detective Agency is a humorous detective novel by Douglas Adams, first published in 1987. It is described by the author on its cover as a "thumping good detective-ghost-horror-who dunnit-time travel-romantic-musical-comedy-epic".
The book was followed by a sequel, The Long Dark Tea-Time of the Soul. The only recurring major characters are the eponymous Gently, his secretary Janice Pearce and Sergeant Gilks. Adams also began work on another novel, The Salmon of Doubt with the intention of publishing it as the third book in the series, but died before completing it.
A BBC Radio adaptation starring Harry Enfield was broadcast on BBC Radio 4 in October 2007. A second series based on the sequel was broadcast on October 2008. A 2010 television adaptation by Howard Overman for BBC Four borrowed some of the characters and some minor plot elements of the novel to create a new story.

My all-time favourite book. I would recommend this to anyone

Oftentimes exceedingly clever, this book was a joyous read throughout.

Don't Panic: The Official Hitchhiker's Guide to the …