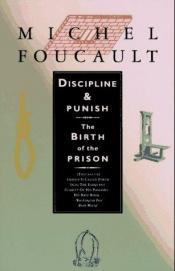 Discipline and Punish: The Birth of the Prison is a 1975 book by the French philosopher Michel Foucault. An analysis of the social and theoretical mechanisms behind the massive changes that occurred in Western penal systems during the modern age, it focuses on historical documents from France. Foucault argues against the idea that the prison became the consistent form of punishment due mainly to the humanitarian concerns of reformists. He traces the cultural shifts that led to the prison's dominance, focusing on the body and questions of power. Prison is a form used by the "disciplines", a new technological power, which can also be found, according to Foucault, in places such as schools, hospitals, and military barracks.
In a later work, Security, Territory, Population, Foucault admits that he was somewhat overzealous in his descriptions of how disciplinary power conditions society; he qualifies and develops his earlier ideas.

The Order of Things

A Thousand Plateaus: Capitalism and Schizophrenia(1 …