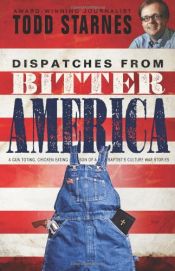 FOX News Radio reporter Todd Starnes is a self-professed “gun toting, chicken eating son of a Baptist” whose Dispatches from Bitter America is “a collection of stories from my travels across this country (and) conversations I’ve had with regular folks who have deep concerns about the direction we are going as a nation.”

In his award-winning, satire-meets-serious writing style, Starnes jumps headfirst into the current culture war, taking on the topics that are dear to every American: religion, health care, freedom, country music, barbeque, and so forth. Along the way, he shares exclusive interviews with political commentator Sean Hannity, former Arkansas Governor Mike Huckabee, cooking sensation Paula Deen, and pop singer Amy Grant, always hoping to go from bitter to better.

"In Dispatches From Bitter America this 'Great American' finds that not only is our American way of life under attack, but also that most Americans do in fact love God, this country, their families, and are anything but bitter!"

Sean Hannity, New York Times best-selling author, FOX News host of Hannity
"Todd Starnes combines sound research with his signature wit to tell the stories of regular Americans who are standing up to a secular movement that seeks to remove all religious expression from the public square. This is a compelling book that puts our entire existence into the perspective of eternity."

"You will cheer for America while laughing your head off!"

"Todd Starnes captures the sentiments many Americans feel as they helplessly watch the traditional values they grew up with being stomped out and over-ruled by political correctness. Todd's stories will strike a chord, whether it's 'The War on Christmas,' 'Tag, You're Out,' or 'The Chocolate Czar.' Brownies now banned from school? Bah humbug."

Gretchen Carlson, co-host, Fox and Friends
"Dispatches from Bitter America features Todd Starnes at his best. With his trademark wit, Todd tackles questions being asked by Americans who wonder what is happening to our country. Starnes manages to get to the heart of the matter in a way that is both packed with information and sprinkled with humor. Todd Starnes is a man of immense faith, madly in love with our country, and endowed by his Creator with the unique talent to tell a story like very few can. Simply put, Dispatches From Bitter America is the best book that I have read this year!"

"Todd Starnes is a masterful storyteller. In Dispatches of a Bitter America, he offers commentary on today's current events through the lens of a self-proclaimed gun toting, fried-chicken-eating son of a Baptist. Todd has always been one of my favorite news personalities and good friends. Now he is one of my favorite storytellers. Warning: don't start reading this book unless you are prepared to finish it. It's just that good."

Common Nonsense: Glenn Beck and the Triumph of Igno …

The Bible of Unspeakable Truths

The Great Derangement : a terrifying true story of …

Spanking the Donkey: Dispatches from the Dumb Seaso …