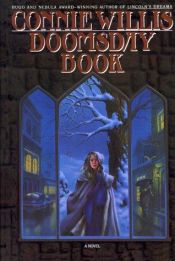 For Kivrin, preparing an on-site study of one of the deadliest eras in humanity's history was as simple as receiving inoculations against the diseases of the fourteenth century and inventing an alibi for a woman traveling alone. For her instructors in the twenty-first century, it meant painstaking calculations and careful monitoring of the rendezvous location where Kivrin would be received.
But a crisis strangely linking past and future strands Kivrin in a bygone age as her fellows try desperately to rescue her. In a time of superstition and fear, Kivrin — barely of age herself — finds she has become an unlikely angel of hope during one of history's darkest hours.
Five years in the writing by one of science fiction's most honored authors, Doomsday Book is a storytelling triumph. Connie Willis draws upon her understanding of the universalities of human nature to explore the ageless issues of evil, suffering and the indomitable will of the human spirit.
For nearly a decade, Willis has dazzled readers with her short fiction. Her first novel, Lincoln's Dreams, received unanimous high praise and won the John W. Campbell Award. Now she pens a sensational work about human struggle and redemption set in the time of the Black Plague.

Top 5 of my favorite books EVER

A girl travels through time, to medieval England, during the time of the black death. Very uneventful. No interesting ideas.

A Man Rides Through