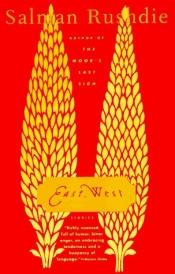 East, West is a 1994 anthology of short stories by Salman Rushdie. The book is divided into three main sections, entitled "East", "West", and "East, West", each section containing stories from their respective geographical areas. Though Rushdie himself never divulged the exact inspirations for his stories in East, West, it is commonly thought that the central themes of each of his stories are drawn from his personal experiences as an immigrant in England during the time of the fatwas issued against his life. Rushdie weaves in lots of pop cultural references into his stories, just as television and Western media such as MTV and movies like Rambo have become popular throughout the world and on the Indian subcontinent. The influence and travels of Indians and Indian culture is also shown in the West.
Rushdie's collection of short stories East, West is loaded with references to Bollywood, beginning by the tragic character Ramani in "The Free Radio." He is compared to great Bollywood actors because he has a beautiful face, blessed with the good looks of none other than Krishna himself : "Such a handsome chap, you should go to Bombay and be put in the motion pictures".

True History of the Kelly Gang