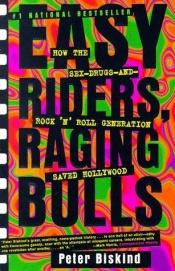 Easy Riders, Raging Bulls: How the Sex-Drugs-and-Rock 'N Roll Generation Saved Hollywood is a book written by Peter Biskind and published by Simon and Schuster in 1998. Easy Riders, Raging Bulls is about the 1970s Hollywood, a stand-alone period of American film which brought about films such as The Godfather, The Godfather Part II, Chinatown, Taxi Driver, Jaws, Star Wars, The Exorcist and The Last Picture Show. The title is taken from films which bookend the era: Easy Rider and Raging Bull. The book follows Hollywood on the brink of the Vietnam War with a group of Hollywood film directors known as the "movie brats", beginning in the 1960s and ending in the 1980s.
The book was the basis of a 2003 documentary film of the same name directed by Kenneth Bowser and narrated by actor William H. Macy. It was screened out of competition at the 2003 Cannes Film Festival. Rotten Tomatoes gives it a score of 100% based on reviews from 8 critics.

The Kid Stays in the Picture: A Hollywood Life

The making of Pride and Prejudice