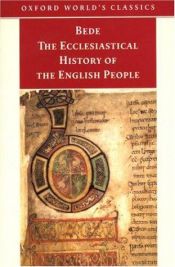 'With God's help, I, Bede ... have assembled these facts about the history of the Church in Britain ... from the traditions of our forebears, and from my own personal knowledge'

Written in AD 731, Bede's Ecclesiastical History of the English People is the first account of Anglo-Saxon England ever written, and remains our single most valuable source for this period. It begins with Julius Caesar's invasion in the first century BC and goes on to tell of the kings and bishops, monks and nuns who helped to develop government and convert the people to Christianity during these crucial formative years. Relating the deeds of great men and women but also describing landscape, customs and ordinary lives, this is a rich, vivid portrait of an emerging church and nation by the 'Father of English History'.

Leo Sherley-Price's translation from the Latin brings us an accurate and readable version of Bede's History. This edition includes Bede's Letter to Egbert, denouncing false monasteries; and The Death of Bede, an admirable eye-witness account by Cuthbert, monk and later Abbot of Jarrow, both translated by D. H. Farmer.

A History of God

Lost Christianities: The Battles for Scripture and …