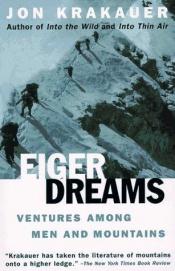 Eiger Dreams: Ventures Among Men and Mountains is a non-fiction collection of articles and essays by Jon Krakauer on mountaineering and rock climbing. Eleven out of twelve of the chapters were initially published between 1982 and 1989 in the magazines Outside, Smithsonian, and New Age Journal.
It concerns a variety of topics, from ascending the Eiger Nordwand in the Swiss Alps, Mount McKinley in Alaska or K2 in the Karakoram, to the well-known rock climbers Jon Krakauer has met on his trips, such as John Gill, Adrian Popovich or the Burgess brothers, Adrian and Alan. He also describes other extreme sports, such as canyoneering and climbing frozen waterfalls.

Alive: The Story of the Andes Survivors

The Bonfire of the Vanities