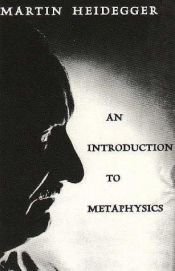 Introduction to Metaphysics is a book by Martin Heidegger and is the published version of a lecture course he gave in the Summer of 1935 at the University of Freiburg. The book is famous for its powerful reinterpretation of Greek thought and infamous for its acknowledgement of the Nazi Party. The content of these lectures was not published in Germany until 1953.
Heidegger commended this book along with his work Being and Time, as summarising his views at that time on ontology. Contrary to Heidegger's various statements about Introduction to Metaphysics, some scholars believe that this book is more detailed and specific to his earlier work than the title or publication date may suggest.

Kant and the problem of metaphysics

Giordano Bruno: Cause, Principle and Unity: And Ess …