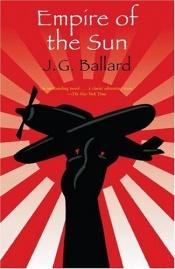 Empire of the Sun is a 1984 novel by J. G. Ballard which was awarded the James Tait Black Memorial Prize and was shortlisted for the Man Booker Prize. Like Ballard's earlier short story, "The Dead Time", it is essentially fiction but draws extensively on Ballard's experiences in World War II. The name of the novel is derived from the etymology of the name for Japan.
Ballard later wrote of his experiences in China as a boy and the making of the film of the same name in his autobiography Miracles of Life.