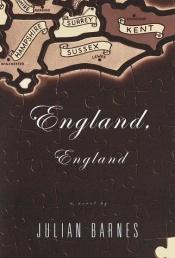 England, England is a satirical postmodern novel by Julian Barnes, published and shortlisted for the Booker Prize in 1998. While researchers have also pointed out the novel's characteristic dystopian and farcical elements, Barnes himself described the novel as a 'semi-farce'.
England, England broaches the idea of replicating England in a theme park on the Isle of Wight. It calls into question ideas of national identity, invented traditions, the creations of myths and the authenticity of history and memory. The novel thereby relates to Baudrillard's concept of simulacra and negotiates the meaning of replicas in a postmodern age.