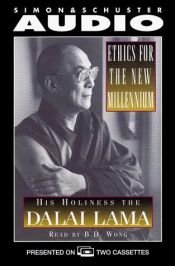 Ethics For The New Millennium

In a difficult, uncertain time, it takes a person of great courage, such as the Dalai Lama, to give us hope. Regardless of the violence and cynicism we see on television and read about in the news, there is an argument to be made for basic human goodness. The number of people who spend their lives engaged in violence and dishonesty is tiny compared to the vast majority who would wish others only well. According to the Dalai Lama, our survival has depended and will continue to depend on our basic goodness. Ethics for the New Millennium presents a moral system based on universal rather than religious principles. Its ultimate goal is happiness for every individual, irrespective of religious beliefs. Though he himself a practicing Buddhist, the Dalai Lama's teachings and the moral compass that guides him can lead each and every one of us—Muslim, Christian, Jew, Buddhist, or atheist—to a happier, more fulfilling life.

His Holiness the Dalai Lama's newest book, The Wisdom of Compassion, is now available from Riverhead Books.

The Universe in a Single Atom: The Convergence of S …

What Makes You Not a Buddhist

Escape from the Land of Snows: The Young Dalai Lama …