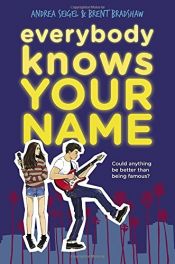 Everybody Knows Your Name

A romantic comedy with an unforgettable cast of characters (and way more laughs than any episode of American Idol), perfect for fans of Pitch Perfect.

Meet Magnolia.
Her father's dead, her boyfriend's ditched her to commit himself more fully to surfing, and her mother's depressed because she can't get cast on The Real Housewives of Orange County. All Magnolia wants is to reinvent herself.

Meet Ford.
Half his family is in jail, the other half probably should be, he shoplifted his way into a job at a record store, and his brother pawned his 1953 Telecaster for a quick buck. All Ford wants is to reinvent himself.

Ford, meet Magnolia.
When the two teens are cast in Spotlight, a reality TV singing competition, both see it as their chance to start anew. With each episode, as they live together in a Hollywood Hills mansion and sing their hearts out, Ford and Magnolia fall in love. But how genuine can that love be when a television audience is watching their every move—and when their pasts are catching up them so much faster than they can run?

The Summer I Turned Pretty