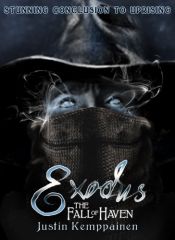 Exodus (The Fall of Haven Book 2)

The uprising ends in success for the denizens of Old Haven, but their victory comes hollow and short-lived. A last-ditch effort of the Citizen leader casts the city into darkness, the protective field blocking out the sun, sky, stars, and the hope of a better life.

Chaos and death follows. The Citizens and Old Havenites fight for survival and revenge, and months pass in brutal conflict. Thousands die with no end to the war in sight, and the constant darkness and weary conditions create a rising despair among the ragged combatants. Many lose hope, and other plans are born, desperate attempts to circumvent the deadly sterilization field and escape the doomed city.

However, a terrible, powerful shadow rises within the forgotten ruins of Old Haven. As the futile war rages on above, this dark and sadistic force gathers strength and waits for the proper moment... the moment when all of those in the city fall to its might.