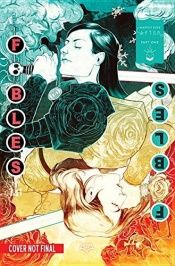 Fables Vol. 21: Happily Ever After

In the aftermath of Bigby Wolf’s destruction, a shift in the Fables’ underlying power structure threatens to split their community into two warring factions - one led by Snow White, the other by her sister Rose Red. Accelerating this process are the machinations of an unsuspected enemy within, who brings Bigby back from the dead with all of his lethal power but with none of his redeeming humanity.

After thirteen years and tales beyond counting, the saga of Fabletown is drawing to a close - but it’s not going gentle into that good night. With HAPPILY EVER AFTER, the creative juggernaut of Bill Willingham, Mark Buckingham, Steve Leialoha and Andrew Pepoy are joined by an armada of special guest talents - including Matthew Sturges, Eric Shanower, Shawn McManus, Jae Lee, Terry Moore, Russ Braun and Chrissie Zullo - for the penultimate chapter in the celebrated FABLES chronicles! Collects issues #141-149.

The Tragical Comedy or Comical Tragedy of Mr. Punch