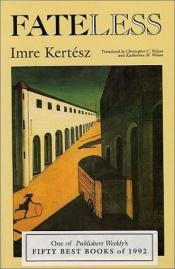 Fateless or Fatelessness is a novel by Imre Kertész, winner of the 2002 Nobel Prize for literature, written between 1969 and 1973 and first published in 1975.
The novel is a semi-autobiographical story about a 14-year-old Hungarian Jew's experiences in the Auschwitz and Buchenwald concentration camps. The book is the first part of a trilogy, which continues in A kudarc and Kaddis a meg nem született gyermekért.
Kertész won the Nobel Prize for Literature in 2002, "for writing that upholds the fragile experience of the individual against the barbaric arbitrariness of history".
The book was first published in English in 1992 as Fateless, while in 2004 a second translation appeared under the correctly translated title Fatelessness.

The Book of Ebenezer Le Page