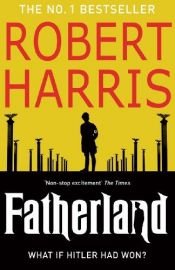 Fatherland is a best-selling 1992 thriller by the English writer and journalist Robert Harris. It takes the form of a detective story in an alternative history in which Nazi Germany won World War II. The lead protagonist is an SS officer investigating a murder of a Nazi government official who was one of the participants at the Wannsee Conference. In so doing, he discovers a plot to eliminate all attendees to help Germany gain better political accommodations with the United States.
The novel was an immediate best-seller in the UK. It has sold over three million copies and has been translated into 25 languages.

Absolutely amazing book. While the scenario is outlandish it more than makes up for it in writing